Mum had been in care for four years, and for the vast majority of that time I had been more than happy with the home.  I knew how fortunate we were to be able to afford good care in pleasant surroundings.

In summer 2015, however, a number of changes began that altered the character of the place and made me uneasy.  Chiefly, a new wing had opened in mum’s dementia nursing unit, which doubled capacity, without double the staff.  Resources overall appeared to be stretched more thinly, while an extensive programme of cosmetic refurbishments continued.

Throughout the autumn I was increasingly concerned that mum and other bed-bound residents in the old wing were being left unattended for long periods of the day, while staff were fully occupied in care tasks or supervising the new lounge at the other end of the unit.  The old lounge outside mum’s room and the nursing station next door were now empty.

I usually visit each Saturday, but one Friday in December, with bad weather forecast the next day, I decided to postpone my weekly visit until the following Wednesday, to attend the Christmas party on the unit.  I phoned to check that all was well meanwhile - and was taken aback to learn that mum had been moved into a new room a couple of days earlier.  I had been there the previous Saturday and am always available by phone and email, but no-one had spoken to me about any plans to move her or otherwise consulted me.

Given mum’s extreme frailty, I had misgivings about such a hasty and inexplicably furtive move, but reasoned that perhaps it was the manager’s way of addressing my concerns about her spending too much time alone; the new room, I was told, was next door to the nursing station in the new wing.  Having been assured that she was OK and “beginning to settle”, I decided to give benefit of the doubt until I had seen the room on Wednesday.

With hindsight, I should have heeded my instinct.  Because at 7.00am on that Wednesday, I received a call from night staff – paramedics were in attendance, and were about to take mum to hospital. 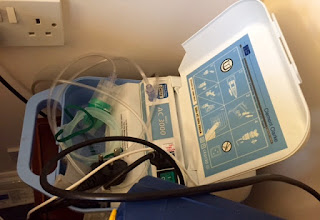 This was a complete shock, as there had been no prior suggestion of acute illness.  She is mildly asthmatic and prone to low-level chest infections, but medication was routinely in place to treat these, there had been nothing untoward when I had last seen her, and no concern had since been expressed to me by staff; furthermore, I had signed an advance care plan which stated that mum should not be taken out of the home, except in life-threatening circumstances that could not otherwise be managed – and never unaccompanied.

(Her dementia symptoms were such that she had not been out of the home since 2012, or even out of her old room in the home for over a year; changes of environment caused her too much distress.)  Was there anyone to go with her?  No. It was the last hour of night shift and no staff could leave the premises.

I spoke to a paramedic, who insisted that mum had “severe breathing difficulties” and unless they took her immediately, she could die. It was their job to keep her alive; the advance care plan was irrelevant.  (I have since learned that there is a difference between an advance care plan and advance decision.  The former is merely an expression of wishes agreed between a person - or their representative, if they have already lost mental capacity - and a private care provider; the latter has legal force, but can only be drawn up by the patient themselves while still having capacity, and pertains to NHS services.  The advance care plan can be overridden by doctors or paramedics in what they consider to be the patient's "best interest" in an emergency, and has no force outside the premises of the private care provider, ie. in an ambulance or hospital.)

All I could do was get straight into the car and race the 100 miles in morning rush-hour traffic to join her. (What if that hadn’t been possible?)  I knew it would take me up to three hours to get there – in which time my beloved mum, a vulnerable 89-year-old with severe cognitive disability, could die alone and terrified in the back of an ambulance or in a strange Emergency Department, with no-one who knew her to comfort her.  This was not meant to happen.  Everything I had done in the preceding decade or more to care for her was aimed at avoiding such an undignified and desolate end.

En route, I spoke to the day nurse, who was trying to find someone to go ahead of me to the hospital, as I had begged, but reiterated that there was no-one available from shift.  They simply did not have any slack in the system. (Mum’s local friends are now also very elderly and could not attend such a distressing emergency.)  At my request, the nurse called a particular care-worker who knew mum well, and she agreed to go – on her day off, using her bus pass.  She was there when I arrived, a kindness for which I’m eternally grateful.

I’ll discuss the hospital experience in another post.  Suffice it to say, by the time I got there (and indeed before the care-worker had arrived), mum had been treated with IV fluids and antibiotics.  No medical records had been sent with her, so doctors had no drug history; they only obtained this by phone after I arrived. 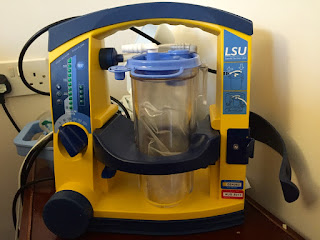 The diagnosis was aspiration pneumonia - a prime cause of death in people with dementia.  This occurs when a person inhales a piece of food or fluid and develops an infection on the lung.  Symptoms can look like choking (and choking may have caused the inhalation), but the mechanism is different; suction equipment, available at the home for choking emergencies, can only remove an obstruction in the throat, not the lung.

People with dementia often develop problems with chewing, swallowing, and inhalation – three subtly different processes in the mouth – due to both diminished motor skills and cognitive malfunction.  Supervision with meals is therefore vitally important in the latter stages of the disease.

I had seen mum only 10 days earlier, but I was shocked at her changed appearance.  Her weight had already been very low (about 5 stone), but in the interim her face had become skull-like and one of her eyes was gummed shut with infection.  She had evidently lost weight in that week.

As far as medics were concerned, her treatment was over.  She was admitted overnight for observation, mainly in order to arrange transport back to the home, and to ensure that she was strong enough to withstand it.  A social worker from the Older Adult Liaison team intimated that I had to seize the right moment, as elderly people transferred in such circumstances often do not survive the trauma: where would I rather she died?  Here in hospital, or back in the home?

While mum was being prepared for discharge the next day, I went to the home to fetch a clean nightie (she had not been sent with any personal effects or change of clothes).  This was my first opportunity to see the new room – and again I was shocked at what I found.  Yes, I was pleased that it was next to the manned nursing station and close to the new lounge; but it was a smaller room with less storage space than her old room – and it had been left in a terrible state of disarray.

This was not a result of the paramedic attendance, but of the room move a week earlier.  Mum’s belongings had been dumped willy-nilly on any available surface, including the bathroom; a number of things had gone missing (some never to be recovered, with no explanation).  Everything was covered in dust.  The wardrobe was more than half full of other people’s clothes.  The toilet flush was broken; and in the bathroom there was no paper towel dispenser, but a mirror – a real no-no in a dementia unit.  It all spoke of haste and lack of time even to make good after the event.  What was so urgent that she had had to be moved in this insensitive way, without my knowledge?

I had experienced possibly the worst 36 hours of my life, desperate to ensure that my dear mum, whom I had sought to protect for so many years, would not die alone in sordid conditions.  Now I stood in this room – for which we were paying over £1,200 per week – and struggled to understand how all this could have happened in a previously exemplary home, for which I had written glowing reviews and even editorial in praise of the wonderful staff.

Over the next four months, as I pursued a complaint against the provider, I began to find some answers…