[NB: This post was written in 2016, pre-COVID-19. Restrictions on visiting care homes may now apply; please check with the provider.]
Back in 2011, when I faced an emergency search for a care home for my mum, choice was limited.  There were simply not enough homes.  Since then the market has rapidly expanded, and today we see an explosion of predominantly upmarket “luxury” developments boasting lavish facilities and “five-star dining”. The cost of a room in such an establishment and the inequalities of funding provision is another story; but, assuming you (or a funding body) can afford it, does five-star decor mean five-star care?  Not necessarily… 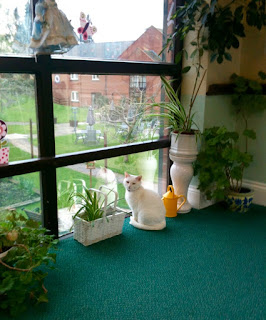 Back in 2011 when I started my quest, I found that most homes were geared either to early stages of dementia (where residents are still able to feed and dress themselves and to socialise with only light supervision), or to late stage (where they are mostly bed-bound and in need of full nursing care).  The difficult mid stage – still mobile, active, and sociable, but increasingly confused, paranoid, and needing secure keypad entry and exit – was the hardest to accommodate.

Our situation was exacerbated by the fact that mum could not by then tolerate any journey longer than twenty minutes from the family home where she still lived, and I am based a hundred miles away (up to three hours’ drive from that hometown).  Should I look for somewhere local and reasonably familiar to her, where she could keep her own GP and have visits from friends, or move her closer to me, where the environment would be completely alien and I would be her only visitor, but could see her more often?

I investigated both, but in the event the choice was made for me.  Options were so few that only one stood out as suitable: a well-established home ten minutes away from mum’s house, which had a strong local reputation and was already known to us from a family friend, whose relative had lived happily there in former years.  It was still run by the same manager, a nurse of long-standing experience in elderly and dementia care, who had been in charge since the home opened and won consistently excellent inspection reports. 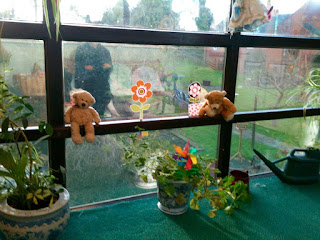 As soon as I stepped onto the premises, I knew this was the place. It was tranquil, with beautiful gardens, tasteful furnishings (similar to mum’s own home), and good food - including a fine daily selection of homemade cakes and desserts, designed to tempt fragile elderly appetites and boost calorie intake, if main courses proved a challenge.

It was bright, fresh, and clean, with no tell-tale “smell of wee and cabbage”.  Residents were smartly dressed in well-laundered clothes, and looked cheerful and relaxed.  Yes, it was expensive, but no more than others I considered (in such parts of the country, no residential care is cheap!); and, crucially, it was not the decorative surroundings that impressed me - the atmosphere felt right.

Arriving unannounced one Saturday lunchtime for my exploratory visit (meals are always early in care homes and the busiest times of day; I didn’t know that then), I was taken on an impromptu tour by a care-worker.  It’s a good sign when visitors are always welcome and staff are happy to show you around without appointment.  At that time, I barely knew what I should be asking, but with hindsight can see that my instinctive response picked up on features I have since learned are best practice in dementia care.

While clean, the place was not overly tidy – there was a degree of “clutter” (knickknacks, photos, books, pot plants, soft toys) that made it feel homely and gave the residents familiar landmarks to orientate them to their rooms; toilet doors were painted bright yellow with big, clear picture signs, and there were contrast-coloured handrails around the corridors (people with dementia often have visual, spatial, and balance problems and may not be able to see white-painted rails or doors that blend into walls); meals were served on bright yellow or blue crockery for the same reason; there were no mirrors or shiny surfaces, which can be disturbing to people with dementia who do not recognise their own reflection.

As mum had always been fond of animals, I was pleased to see there were pets (three cats, a budgie, and a tank of fish). There were plenty of informal seating areas around the building for residents to rest on their perambulations and have some quiet space – for instance, a charming seaside-themed corner. I was particularly taken by the welcoming feel of a small conservatory area, where people could sit and look out at the gardens, surrounded by a cosy jumble of plants, watering-cans, windmills, and an array of dolls and soft toys – spontaneously arranged as if in dialogue, with a sense of humour and affection. 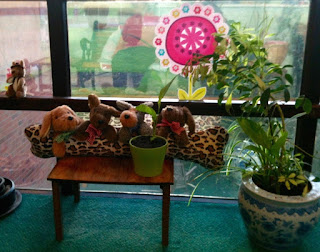 The latter immediately struck a chord with me, because mum had for years been obsessed with collecting soft toys, amassing a whole spare-room-full, which she would religiously “put to bed” each night.  These toys instantly told me that the staff understood and respected the emotional needs and perceptions of people with dementia.  It was evident that everything in the home was geared to the comfort and well-being of the residents – it was first and foremost, their home.

When I met the care staff, I knew nothing of their formal qualifications, but felt that they possessed the most important attributes – kindness and empathy; and though I could not have defined it at the time, there was a sense of firm leadership running through every aspect. These things you can’t learn from a website or inspection rating; you have to go there, feel the vibes.

And so it was that I took a room in this home, before I knew if mum would accept it, dreading her reaction, but conscious that I could not afford to lose the chance of such a rare good place. Despite my misgivings about having to place her in care at all and the emotional and practical hurdle of that move, she settled more readily than I expected.

Once we had weathered this upheaval, I thought we were on an even keel at last; and for the next four years, while I packed up and sold our house to pay the fees, took over legal management of mum's affairs, started to rebuild my own life, and continued to make the regular 200-mile round-trip to support her, I had complete trust in the home.

By autumn 2015, mum had been resident for almost twice the national average stay - a testament to the quality care she received. Dementia is a degenerative syndrome, so of course her condition deteriorated in that time and will continue to do so.  But having experienced so much trauma in the preceding decade, when I had struggled to keep her safe at home, I knew she would otherwise have come to grief and was immensely grateful to have her still “with us”.

People often ask me, “Is she happy there?” - sometimes in front of her; please don’t!  Firstly, there’s an underlying judgmental implication that if she isn’t, I must have put her there for my own selfish convenience, while there remains a happier alternative elsewhere. Secondly, the honest answer is too complex.  Although she can still experience pleasure and has good days (as well as bad), I can’t say mum would be truly “happy” anywhere now as a general state, given that she has no context of memory and relationship, and constantly yearns for long-dead parents and the home of her childhood, which can never be restored.  She was already tormented by such feelings when still living in our own house.

Paranoia, delusion, hallucination, and confabulation are her dominant symptoms of dementia and often result in distress, because to her everyone is a stranger and potentially means her harm.  Rather than “happiness” therefore, I find it more realistic to think in terms of peace, contentment, and security – which the home provided.

Continuity is key.  In 2011 mum had first moved into the residential dementia wing, but by 2014 she was no longer independently mobile and needed continence care; she was able to move seamlessly across into the dementia nursing unit – at that time, a small wing of 12/13 residents, with four care staff (including a nurse) on duty by day and two at night.  This is a very good staff/resident ratio and made for excellent care.  As a regular visitor, I knew all the residents and staff and they knew mum and me; they became, in effect, our family.

As mum’s condition progressed, there were times when she seemed to be fading, and plans for end of life care were made.  Although she rallied, I prepared myself, confident in the belief that when the time did come, both of us would be supported by familiar people, who cared about us, in peaceful, familiar surroundings.

But just before Christmas 2015 that confidence was brutally shaken.  A crisis brewing throughout the autumn came to a shocking head - and I learned that, even if you have found a good home, vigilance must never be relaxed…