I Don't Know Who You Are

The day had started well. A jewel-bright morning of azure sky and fields fluorescent with yellow oilseed rape, as I made the two-and-a-half hour journey down to see mum. I stopped off as usual at the M&S garage shop, to stock up on flowers, a newspaper, and wine for her meals in the care home. Worried that she’d been eating less in recent weeks, I tried to think of something with which I could tempt her, but the sweet goods that had once been her favourites seemed pointless now that she was even turning down freshly-baked cakes and desserts in the home. At Easter, I’d taken hot cross buns, but she had waved them away with never a look.

So when I spied a strawberry stall by the roadside, I pulled over, pleased to have found a treat vibrant with life from the outdoors – the lush, green countryside of our home county that she never ventures into now. I thought of the many spring weekends like this, when we’d have been setting off out for lunch together at some village inn or wine bar in the town centre, where we’d sit under big umbrellas on the pavement and watch the world go by, eating fish and chips or a Sunday roast with a glass or two of wine… 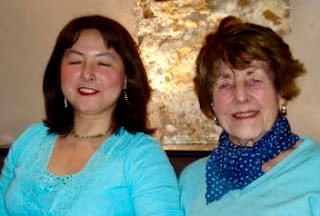 Those days are gone. Only I remember them now.

But I was in light-hearted mood. This week I’d managed to set off a bit earlier and didn’t have to rush to make the early lunchtime at the home. Traffic was quieter too. I would have more time to arrange the flowers in mum’s room, check her supply of toiletries, and tidy myself up before lunch.

Mum was pleased to see me. “I didn’t know you were coming”, she said, “that’s a lovely surprise!”  It’s always a surprise, despite the fact that I’m there, regular as clockwork, every other weekend. Mum has long since stopped having any concept of time, so I don’t correct her or tell her when I’ll be coming again next – only “soon”.

When I used to visit her at our family home, I would call ahead to tell her I was setting off in the car. At some point, perhaps four or five years ago, I realised that despite this accustomed call, which had been our routine since I moved to London in my twenties, mum would always be surprised when I arrived. In the time it took me to drive there, she had completely forgotten I was coming. Likewise, when I returned, I would call her as usual to say I’d arrived back safely; that had been essential since I’d left home. But latterly it meant nothing. “Back?”, she would ask blankly. “From where?”  “Your house”, I would say - to be met with bewildered silence.

This week, I noted that staff had dressed her in the bright pink jumper I’d bought a few weeks ago, but had not yet seen her wearing. It suited her and lit her up. Like me, mum chose steak and mushroom pie for lunch (in her eyes, we must always have the same), and managed a few mouthfuls. I was ravenous after the long drive, but tried not to wolf mine down too fast, to encourage her to eat more. She drank her glass of wine and seemed to be doing quite well.

But suddenly she looked at me – a sharp, searching, mistrustful look, as if some black cloud or demon had passed behind her eyes - and I knew something in her head had changed. And then she said it: “I don’t know who you are. Why are you here?”

I choked back the shock, tried to keep calm, show no reaction.  “I’ve come to see you”, I said. “I’m Ming. Your daughter.”

“Pfft!”, she said, with a dismissive gesture. “You look like. But you’re not.”

It was my late father’s birthday that day. He’s been dead for 26 years. Normally, I would never ask mum “do you remember?” this or that; I know you’re not supposed to do that to someone with dementia, because the answer is usually no – leading to confusion and sense of failure. But on this occasion I needed to know – what did she recall now of our past life?  So I asked her, “Do you remember Wai?  My dad?”  “Of course I do!”, she said, outraged.  “Stupid!”

I focused on my meal. She had stopped eating hers and would not be persuaded to try any more; she started to mess it all up.

“Dreadful!”, she exclaimed in disgust.  “Dreadful!!”

And I couldn’t hold it together. How could it be that she didn’t know who I was, yet was lucid enough for once to know that she was somewhere she didn’t want to be, because something “dreadful” had happened to her? She’s had no context for where she lives for years. Not since she’s been in residential care – nor for some considerable time before that, when she had stopped recognising her own home and was desperately frightened by it. Yet now, in this moment, she somehow knew what she’d “become”. And grieved for it, just as I do.

I fled to her room, as discreetly as I could; and only when the door was shut, a corridor away, did I allow the tears to come. Kind staff followed to comfort me.

I asked them to carry on serving mum dessert, as she’d be more likely to eat that, I thought. And when I’d gathered myself, I went back into the lounge. Mum was oblivious that anything had happened, although her mood was hardly better. She stubbornly and silently refused her favourite meringue, so I tried her with the strawberries. Miraculously, she accepted one or two.

And slowly, over the next few hours, as I sat with her “watching” TV, we regained some equilibrium. By the time I left, she knew that I was “Ming”, that I was her daughter, and that she loved me – although how far she can put those three ideas together I’m not sure any more.

It’s been several years since she’s really known who I am in context: that I’m her daughter, I’m in my forties; I’m not married and have no children; I live in London; I’ve been a writer of TV drama, and I’ve been looking after her. Sometimes she thinks I have a “sister” (I don’t). I believe this is her memory of me as a sweet, pretty, vivacious young woman, the “Ming” she really loves, from the life we’ve both had to leave behind; whereas the person who visits her now is a tired, dowdy, middle-aged woman called Ming, but someone else.

It is generally known that there may come a time when a person with dementia does not recognise his or her own closest family. This is sometimes perceived as a sad but benign stage of “blissful ignorance” before the end, like a gentle drift into sleep. Maybe that’s how it is for some. But not for my mum.

I understood that she hadn’t “known” me, as the real person I am now, for a long time. But this was the first time she’d said so baldly to my face that she didn’t know me at all; and what upset me more was that it wasn’t just non-recognition, but hostile, dismissive, full of active contempt. There was hatred in her eyes.

This is my lovely mum, as I best remember her, in the 1990s, before dementia took its hold. It was taken on one of our many happy pub lunch outings.

It is inconceivable that the mum in this photo would ever look at me with hate or contempt; that she would ever deny me. But as she is now, she does. Not always, thankfully, or permanently as yet. There is still enough of her real self flickering within; but I know that will diminish. Each time I visit, I dread the moment when she looks at me as a stranger and that recall doesn’t come back.

I’m not a religious person, but I can see why the Biblical idea of being “thrice denied” is so powerful. It’s an act of rejection – betrayal – by the person who had previously been closest, most loyal. I’m not drawing comparison with Christ here; but on an emotional level, denial by a loved one with dementia is that ultimate hurt for family. Particularly when that loved one is the only family you have left, the one who loved you most – or perhaps the only one who loved you, to whom you have devoted your life.

Of course, they are not wilfully rejecting you, but are perhaps frightened themselves of not knowing who they are and scared to find "strangers" around them. But understanding that doesn’t make it hurt any less.

There were times in recent years when I broke down in despair at the situation mum and I shared; although I tried not to let her see how upset I was, there was a part of me that wanted her to see, to be moved by it, to show me she still cared. Yet she would watch me cry in a detached, almost anthropological way – like a scientist examining a subject.

The last night we spent together in our family home, the night before I took her into care, she found me curled up, sobbing on my bed. She stood and looked on from the doorway for a few moments, not exactly upset, but vaguely disturbed.

The day before last week’s incident in the care home, when mum had said “I don’t know who you are”, I had been speaking at the Alzheimer's Show in London; I had also sat on a Question Time Panel alongside Jeremy Hughes, CEO of the UK Alzheimer’s Society and Baroness Greengross, Chair of the All-Party Parliamentary Group on Dementia, among other experts in the field.

Afterwards, I met two ladies, who expressed surprise to find me queuing with them for the loos. “We just saw you on that panel”, one of them said, “I’d have thought you’d have somewhere special to go.”  No, I explained, we all have to go in the same place. That strikes me as a good analogy: where dementia is concerned, there are no V.I.P. toilets. We are all in the same queue…

Anyone who saw me speak that day might have thought that I had come to terms with my mum’s dementia, that I’d “got it sorted”.  But the truth is none of us has.

We learn to accommodate it on a practical level, to accept it intellectually. But emotion can never be wholly tamed; those moments, when the person you love most in the whole world says they don’t know who you are, can still floor you, however much control you think you’ve gained.

I’m glad there’s far more dementia awareness now – initiatives such as Dementia Friends to teach the public the basics, and much good work being done in professional dementia care.

But my final thought to policy-makers, media, and professionals at the end of Dementia Awareness Week 2014 is please, never forget how it feels.

For families, it never stops hurting. And sometimes the only honest response is to flee into another room and simply bawl your heart out.