We moved in just before Christmas 1973.  It was a time of power-cuts, strikes, and three-day weeks - but that meant little to me as a child, beyond the novelty of candles when the lights went out.  Far greater was the excitement of our new house in a different part of the country.

And it really was “new”.  One of the first to be completed on an estate marketed as ‘Green Willows’, it had been the manager’s office – a fact still remembered and repeated by my mum more than thirty years later, when so much else was forgotten. 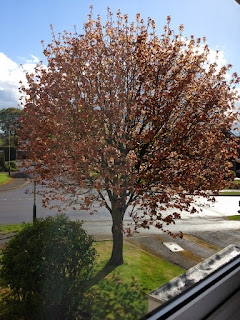 We’d lived in a bungalow before, so an upstairs and downstairs, fitted kitchen units, breakfast room, wood-block floor in the living room - and a separate downstairs loo! – were luxury indeed. There were double garages (even though most people then had only one small family car); and, unlike the street we used to live on, all the front gardens were open plan, with just a tiny strip of concrete to mark the boundary of each property.  The houses were staggered, so that none was immediately overlooked by its neighbour – informal, yet private. How aspirational it must have seemed to our parents, who had grown up in the shadow of war and rationing.

My father’s public sector employer had set up a new HQ in the area. Many of the neighbours worked there too and moved in at the same time; they had children of a similar age – a ready-made community of playmates.  In those days, primary school children didn’t have homework, exams, or too many structured activities.  On sunny evenings, we’d wander round to each other’s houses in the quiet cul-de-sacs, and ask if Angela or Julie, Debbie or Mandy could come out to play?

We’d ride our bikes along the paths that ran around the back of the estate by the stream, make bridges and dens with debris left behind by the builders, and lark about in the foundations of unfinished houses at the top of the road – no “health and safety” then!  We’d dress up in net curtains and “ballet dance” to records in each other’s bedrooms, or “show jump” on space-hoppers in the back garden... 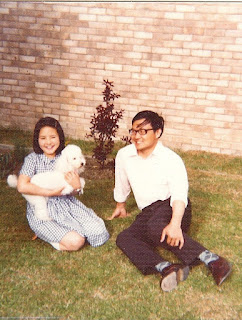 Those days are long gone.  Angela, Julie, Mandy, and I grew up and moved away.  And in recent years, the house that was once such a happy home became a prison to my mum – and to me.

My father died in 1988. I had not yet graduated, but the companionable retirement my parents had anticipated was cruelly ripped away. I was at university, having to study for my finals. Mum couldn’t bear to be alone.

For the first few weeks, she spent nights with a variety of friends, but was reluctant to return to the empty house.  It was some time before she conquered that feeling, and on retirement got a bichon frisé puppy to keep her company; we both adored him.  Arguably, though, he kept her tied to the house, when she might otherwise have been able to travel and make new friends.

For a few years, things moved forward.  Perhaps keen to erase the sad memories of my father’s death in that house, mum threw her energies into redecorations.  She had always been a keen browser of soft furnishings, and I was from childhood her partner in crime on many a trawl of interior decor shops.  Now I visited at weekends, to find new curtains, wallpaper, double-glazed windows, and made-to-measure white bookshelves; but the house was still our home.

“Isn’t this a lovely room?”, mum would often say to me in the calm pale green living room with big windows, looking out onto a peaceful copse at the back.  She loved to feed the birds and squirrels. “It’s so quiet here!”

But gradually the mood changed with her dementia.  Those trees, once soothing, became dark and threatening to her.  “What is this place?”, she started to ask.  “Why have you dumped me in this empty hotel?” 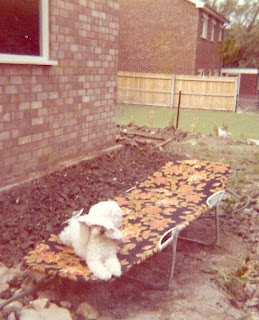 And as she stopped recognising the home where she had lived for nearly 40 years, she grew frightened by the very things that were selling points to the young: double-glazing that kept the air in and noise out; privacy, bordering on isolation; people passing only in cars; no shops within walking distance, nor public transport for those too frail to drive.  “There’s nobody about...”

We were lucky that she could afford taxis into town; the regular drivers were kind and looked out for her, helped her with her shopping. But there were more and more incidents of confusion: mixed up appointments, lost bank cards, purses, and forgotten PIN numbers.  Taking mum’s booking became a liability for them.  She was no longer safe to go out on her own.

So during the week she was confined to the house; and increasingly when I was there, I found I couldn’t leave her alone for a minute – if I dropped her off in town to park the car or just got up to pay a restaurant bill at the bar, I’d have to hurry back to where I’d left her, before mum wandered off or got distressed.  Supermarket trips became a trial, as she couldn’t walk far but insisted on accompanying me every step of the way; I could never go out of sight.  It became easier just to stay in.  Even then, I could barely leave the room to put the kettle on or go to the loo.  Neither of us could go out.

The house became run down.  For years leading up to this point, mum had been reluctant to allow workmen in for maintenance; any jobs that needing doing, I would have to organise, often against her will.  Cleaning too became a battle.  Mum insisted that she did it herself, but this was a sad delusion.  In truth, she was neither willing nor able by then.  My visits were no longer relaxing social occasions, but frantic covert schedules of domestic chores and admin, done hastily - and fearfully - behind her back. 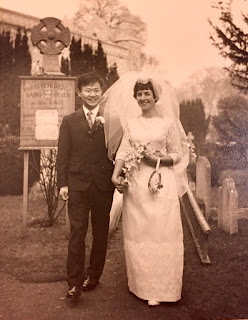 Eventually, mum’s symptoms were such that she had to go into residential care.  One day in the early autumn of 2011, I had to manoeuvre her out of that house - knowing, as she did not, that she would never be coming back.

I had to lock it all up and keep it safe in my absence from 100 miles away; gradually clear it of all our valuables, documents, and personal things, and the hundreds of hoarded and hidden items that mum had amassed in the throes of her illness, when she couldn’t remember what she’d already bought: mountains of bed-linen, crockery (especially mugs), make-up bags, purses, mirrors, novelty key-rings, gift sets of toiletries, rooms full of soft toys that had to be “put to bed” each night, scissors, umbrellas, costume jewellery, drawer after drawer of greetings cards and stationery, and scores of M&S canvas ‘bags for life’ (aren’t they just?).  Madness in 3-D.

Nowadays, my wallet is not full of credit cards, but Gift Aid cards for the many charity shops I’ve frequented.  If they gave Air Miles at the local recycling centre, I’d easily have earned a spa break in the Maldives.

I’ve washed and scrubbed and hoovered; made teas and coffees for numerous workmen.  Preparing the house for sale to pay the care fees, I’ve had to stand by and watch a parade of strangers troop through our home, assessing our belongings and by association our lives, and for the most part deeming them worth very little.

It’s taken me the best part of two years on my own.  In all, I’ve been shackled to that house longer than either of my parents.  I’ve sobbed my heart out there, screamed in frustration and despair, knowing that no-one would hear through the double-glazing, no-one passing by in the cocoon of their car would have any idea of the anguish behind those walls. 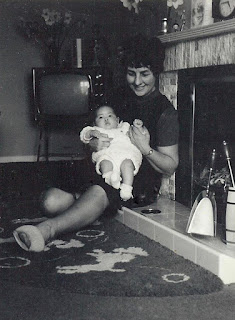 And as I’ve spent my weekends and Christmases in solitary confinement, disposing of our collective lifetime, I’ve paused to glimpse through the window the new generation of children setting out on their bikes (in crash helmets now) and parents unloading shopping from 4x4 vehicles that always stay on the drive, too big for those 1970s garages.  That’s how we must have looked: carefree and busy with the bright new present, blissfully unaware of what the future might hold.

I’ve looked at our treasured possessions and agonised over what to do with them now. Anything that mum can still use or appreciate, I’ve taken in to her.  But what of the rest?  The silver 1920s tea set belonging to her mother, discovered in the loft?  She fretted over its apparent loss for years.  “Here it is!”, I wanted to say.  “Not lost or stolen after all!”  But she wouldn’t recognise it.  The colourful Spanish dish, brought back by a dear late friend from her holiday?  It would be just a bowl. Even mum’s wedding dress, kept in pristine tissue paper for nearly fifty years?  Would it mean anything to her now, except perhaps a vague reminder of loss?

Things are no more than things when robbed of the memory that gives them meaning.  The silver tea set, once so precious, an auctioneer declared to be just electro-plate of a common design – not worth listing for sale. So what did I salvage at the eleventh hour?  A sunflower door-stop that had been an everyday feature of our living room; and a musical box – three kilted musicians made of felt, playing the Skye Boat Song.  I can still see the little shop where mum bought it for me on a day out when I was six years old.  She coached children to sing this song in competition at music festivals, as she had done as a child.  I have no children to hand these memories on to; but for the moment, they remain precious to me.

Mum is unaware of all this.  She has no sense now of that house and we never speak of it.  “Home” to her is the place where she lived as a child in the 1930s and 40s with her parents.

So shall I, when I’m 80 and have dementia, be back in this house in my head?  Looking in vain for my mum and dad to a soundtrack of Bay City Rollers?  Perhaps memory itself is a prison.

I always thought I would shed a tear when I slipped the keys through the letterbox and left for the last time.  But when the day came, I was so tired – mentally, physically, and emotionally - I was simply glad to be finished at last.  As I drove away from that town where I don’t belong any more, past the restaurants filling up with evening trade – couples on dates, workmates out for a drink, families celebrating birthdays and exam results - I felt sad, yes; not to be leaving, but sad for all those lost years, when I should have been making a life in the present and the future, not trapped in someone else’s past.

That, for so many of us, is the dearest cost of dementia.