It's (Not) So Funny How We Don't Talk Any More

There’s something missing now after News at Ten. No phone call from mum. That had been our ritual most nights in the last twenty-odd years since I had moved to London: a general, rambling gossip of at least an hour about the day’s events, what was on TV, anything in the news. When our little bichon frisé dog, Dill, was still alive, I’d love to hear about his antics. 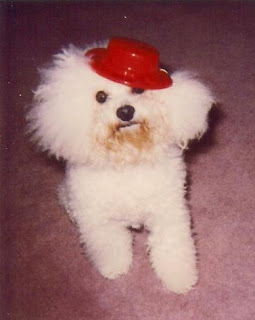 Mum was a performer. She’d trained as a classical singer from early childhood, broadcasting on the radio, and sang professionally until she married: German Lieder and oratorio, such as The Messiah and St Matthew Passion. Her contemporaries on the circuit of Northern choral societies were Kathleen Ferrier and Janet Baker. Later, as a primary school teacher, she retained that instinct to entertain in her communication with the children.

So when she began to repeat herself in conversation (more than a decade ago, perhaps nearer two), it wasn’t initially cause for concern. It just seemed a feature of her general volubility. Yes, it became more prevalent as time went on, but the change was gradual; there wasn’t a point at which I could identify it as suddenly odd. It only became an issue in the last few years, when it grew extreme – repeating a question or story as soon as she had said it and constantly returning to the same.


There were other warning signs that her verbal communication skills were damaged. She started to use generic words for types of food – “white meat” or just the monosyllable “meat”, instead of chicken, turkey, or pork. And her understanding of language became very literal. Figurative expressions and jokes had to be explained; irony and satire became a mystery – she could not process anything that employed disjuncture between what is overtly said and subtextually meant.

The phone calls, which had been a shared pleasure for most of my adult life, now became onerous; mum would call me multiple times in the day and night, sometimes redialling immediately, because she couldn’t remember having spoken to me before and still had a pressing impulse to say something – the same thing, over and over, and often of a disturbing or accusatory nature.

I couldn’t ignore the calls, in case of emergency; and if I put the ansaphone on, it would soon fill up with distressing messages. I realised that mum had lost the ability to distinguish between a recorded message and a live person on the line – if the machine picked up, she would think it was me, refusing to converse. (This explained the numerous occasions when she had described being hurt by friends “not speaking to me”.)

If I went out for the evening, I always had to hurry back for the 10.30pm call, no longer for an enjoyable chat, but simply to allay mum’s fears of not being able to get through to me, and to assure myself that she was in the house and safe. I came to dread the sound of the phone.

So when she went into residential care, I was relieved not to have that constant stress. At last I could sleep at night and get on with some tasks in the day. Mum could have a line installed in her room, but I agreed with staff that it would not be a good idea. Because she could no longer understand phone etiquette – what times are suitable to ring - it would have to be restricted to incoming calls; and that would encourage her to stay in her room all day, when she needed company and supervision.

Staff could dial on the office phone for her (other residents do take calls), but on the whole it has proven best not to attempt this, as it merely unsettles her.  We take for granted the knowledge that a phone receiver has one end where you listen and another into which you speak; that it has to be held the right way up, close to your ear and mouth; that you take turns to speak and to listen; and that you “hang up” at the end of a call. These are all concepts that can become challenging to a person with dementia. And with today’s cordless handsets, even “hanging up” is now an abstract – a mere press of (the right) button.

With people around to distract her and meet her material needs, there’s no evidence mum is upset by the lack of phone contact. She’s forgotten about it. It is I who find it strange.

And when I visit, there’s little talk now. Not because mum is incapable of speech. Other residents struggle with this, but mum retains a sophisticated vocabulary and can still speak coherently. Only she does so sparingly. Sometimes she will address me in Welsh, and is frustrated when I can’t respond. (I knew a little as a child, but it was a long time ago; luckily, she has a Welsh friend who can chat with her in like kind.)

No, content is the problem for us. So many subjects are taboo. Uppermost in mum’s mind are her beloved parents – both long dead, as is my own father, who died at the age of 52. Talk of them cannot avoid the inevitable question: where are they? To which there is no reassuring answer and little possibility of distraction.

Mum can’t tell me what she’s been doing during the week, because she doesn’t remember; I can’t tell her what I’ve been doing, because so much revolves around selling the family home and managing her finances to pay the care fees – a distressing scenario from which I have to shield her. She does not know or accept that she has dementia, so we can never mention that.

And she has no real grasp of where she is – either the care home itself (which she variously believes to be a restaurant, hotel, school, or convalescent hospital), or the town or part of the country. It would not help to try to orientate her in the present, as “home” to her is the childhood home she hasn’t seen since 1944, where her parents would be waiting. I avoid any reference to the actual town where she lives, for fear of reminding her of our house ten minutes away that I have spent nearly two years packing up.

Oh, there’s plenty of advice for conversation-starters in dementia care: picture books, collages, memory boxes, photo albums, music. These may work with some people or between others and my mum, but between us they are largely irrelevant.  She shows little interest in general pictures, media, or even music, which you might expect to be key. Family photos confuse her, as she can’t place them in time or distinguish between herself, me, and her mother; happy scenes may spark her attention for a moment, but it doesn’t last. And memories reawakened of the life now gone are likely to provoke uncomfortable enquiry...

The whole context of our shared past and how it’s been changed by death and dementia is so full of problematic association that I daren’t initiate, only react to mum’s own expressed thoughts – now few and far between.

Friends whom she knows in only one context (as work colleague or neighbour), may find it easier to engage with her, I believe, because they can limit their discourse and focus on positive things. Staff too are better able to tell white lies or go along with misconceptions to reassure her; I similarly find that I can chat more easily with other residents - because I have no emotional investment in the veracity of what’s said or in their response to me. Mum doesn’t like me talking to them though. As far as she’s concerned, no-one else has claim on my attention!

So my visits pass mostly in silence or the neutral chit-chat of strangers: I tell her she looks nice in that pink top, or admire her new shoes; she asks about the weather and traffic on the roads. And then she’ll doze off, and I just sit and read the paper.

There is an awareness of communication difficulties in dementia, but it tends to focus on language itself: vocabulary, memory, and the mechanics of articulating words. It’s more complex than that. Conversation is reciprocal, like a game of tennis. If only one person hits the ball over the net, the rhythm dies; it feels redundant after a while for that person to keep serving. I’m reminded of that famous Zen riddle of the “sound of one hand clapping”. Speech – or lack thereof – becomes a barometer of the relationship.

That’s why I’d suggest that communication in this stage of dementia may be easier for professionals. They have no emotional expectation of the game. There’s no personal disappointment if exchange turns into one-way traffic - net practice, instead of live match.

When I drove back to London after leaving mum in the home for the first time, it struck me that it was also the first time in my life that I’d have no-one to call when I arrived. For over twenty years, I’d always called her to say I was setting off to join her or had arrived safely back in my own place. Who would care now, if I had an accident on the road, or indeed care about anything I did when I was out of sight and out of mind?

Years ago, I’d had to supervise building works at our family home to remedy subsidence. Already in the grip of dementia (although I didn’t fully realise it then), mum had refused to help and I’d been left to clear out rooms full of junk for the builders to get in. Among some old papers, I’d found a letter she had sent me in college, full of humorous, chatty news about dramas at work and the decorating she and my dad were planning. At the time, I was so angry with her for obstructing me in a stressful task on her behalf that I ripped it up and chucked it out with the rubbish. How I wish I’d kept it now!

Clearing out the house more recently, I found a lot of mum’s old diaries - not reflective thoughts, just notes of my weekend visits and the things we’d done together, hair appointments or lunch with her friends, observations of the weather, and trips to the vet with the dog.  Here, in the minutiae of a daily life long gone, was her real self – my mum’s true voice. I treasure those everyday relics.

I am glad not to be plagued any longer by those terrible paranoid phone assaults of latter years. But I miss the aimless, cosy tittle-tattle of our old News at Ten calls. If I see something that would interest mum on TV, I still have the impulse to pick up the phone and say, “Quick, switch on BBC1, there’s Bargain Hunt in Llandudno!”  I’ll never do that again.

But I will keep throwing the ball in the air and trying to reach her over the net...