The Crisis We All Dread

The call came at 11.00pm, as I walked home after a rare night out with friends. "Can you ring the police? They’re at your mum’s house...” It was the Aid-Call phone operator. My mother, then 85, had lived alone since my father died when I was a student 23 years earlier – and for at least the last ten, she had increasingly pronounced symptoms of dementia. Clearly, this wasn’t a conversation to have in the street on a mobile phone. I raced the last few yards into my flat, fighting to quash the rising panic. What had happened this time? Was she OK?

It was just after the August Bank Holiday, 2011; I’d been there, but was now back in London 100 miles away. The wonderful next door neighbours, who kept an eye on her in my absence, were on holiday, as were mum’s other friends. Alone and confused, she had gone wandering, the policeman said, and had knocked on the door of a young family whom she had never met before. They had called the police, who traced me via mum’s Aid-Call alarm. 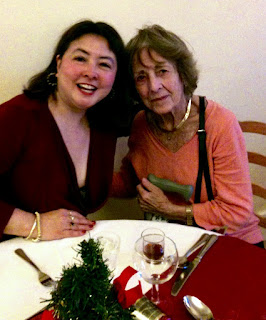 It was not until the end of the week, when I could speak to those neighbours privately, that I Iearned the full story: mum had turned up agitated in the dark of night, sobbing that “a man who used to work for me has broken into my house and is holding my daughter hostage – he’s going to rape her!” As they didn’t know her, they took it at face value - the husband anxiously debating a ‘have-a-go’ attempt to prevent this seemingly imminent attack...

I asked the policeman if he could make mum a cup of tea and a piece of toast while I rang round for help, as she probably wouldn’t have eaten. (I always stocked up the fridge and she assured me she ate, but the rotting food would still be there when I returned). “No problem”, he said. In the background, I could hear mum enthusing, as if high on drugs, about “all these lovely, lovely men!” I don’t know their names, but I’ll always be grateful for their kindness.

There was no-one available to sit with her that night. I had had a few drinks and couldn’t drive the hundred miles then. I called Social Services’ ‘out-of-hours’ number, assuming it to be intended for such emergencies – but was told they had just two people on duty for the whole town, who could only attend for specific tasks, such as taking someone to the loo or turning them over in bed. My only options, it seemed, were to call an ambulance and get her taken to A&E, or to summon an unknown out-of-hours doctor to refer her as an emergency admission to any care home with a bed. Either would have caused her extreme trauma. I had to risk leaving her unattended overnight.

How could I ever have thought she was safe to be left on her own? Well, I didn’t. I knew she wasn’t capable of taking care of herself. But she had always denied it and vehemently rejected help. In order to protect her, I had had to go behind her back to get a referral to social services and to a psychiatrist who finally diagnosed the condition I had recognised for years.

No matter how much time I or others spent with her, mum was increasingly plagued by dread, phoning me incessantly with lurid delusions and accusations, searching for long-dead relatives, manically packing her bags for the ‘evacuation’ she adamantly believed was coming, and locking herself in against imaginary intruders. She stopped recognising the house, even forgetting which was her own bedroom (where she had slept for 40 years), and became unable to envisage the room on the other side of the door.

And my life had stopped. How can you concentrate on anything other than fire-fighting such random daily crises? How can you keep any sense of yourself, when the very foundations of the life you share with the person closest to you are constantly called into question?

I had started proceedings for a Court of Protection order to formally manage mum’s affairs and had been arranging a care home place. I had felt huge guilt and conflict about doing this without her knowledge or consent - we were each other’s only immediate family, each other’s best friend. I hadn’t been sure I could go through with it. But the events of that terrible night convinced me I had no choice.