It was the kind of trip we’d made numerous times together – a few days away in a nice hotel, a bit of shopping, theatre, sight-seeing.  Mum had always been phobic of lifts since getting trapped in one in her youth, so I had booked rooms on the first floor. It was only one short flight of stairs. Hampered by arthritis, she had set off first, taking it slowly, while I waited with the luggage for the lift. We should have emerged on the floor above at about the same time, hardly more than a minute later.

But when I stepped out of the lift with our bags, she was nowhere to be seen.  I thought she might already have let herself into her room, but no. I looked up and down the corridor, called out for her: nothing. Anxious now, I ran back down the staircase, thinking she might have fallen, but thankfully she wasn’t lying injured there. Nor was she in reception.

I returned to the first floor.  Corridor still empty.  Beginning to panic, I dashed up to the next floor, and the next – and eventually I found her.  “Where have you been?”, I scolded, with the angry relief of a frightened parent reclaiming a feckless child. “Why didn’t you just wait for me by the lift?”  She didn’t know. 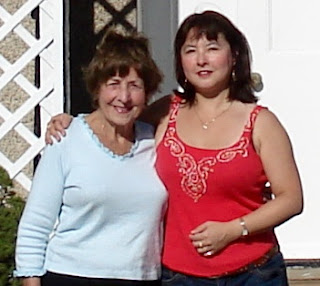 At the time, back in 2004, I couldn’t understand how mum could have become lost with only one flight of stairs to negotiate. But now I recognise this as a classic case of disorientation. Unable to read geographical markers, she had simply kept on moving.

By itself, this incident would have been insignificant. Anyone can have a moment of confusion in an unfamiliar place.  But looking back, it was just one of a number of strange happenings over the years.

There was the time, for instance, when I was struck down with a stomach bug while visiting mum for the weekend.  Afraid I was going to choke after hours of violent retching, I begged her from my supine position on the bathroom floor to call the out-of-hours doctor. She couldn’t make that call. With my stilted prompts, she got as far as dialling the number, but proved unable to describe my symptoms or to give the doctor my address to register me as a temporary patient. I had to crawl on my hands and knees to the phone to speak to him myself.

And as time went on, I noticed that mum found it increasingly difficult to open food or household packaging. Instead of following instructions or doing the most obvious, intuitive thing, she would employ the most difficult, strenuous means – hacking away at plastic boxes with a knife instead of snapping the designated tab, or tearing the ends of a packet of wet wipes, instead of simply pulling the adhesive strip at the front. Attempting to remove a stain from the carpet, she once cut off the pile with scissors.

Then there was her obsession with the washing-up brushes.  Whenever I went to use them, they would not be to hand by the sink, but hidden in some far corner.  Why?  “Because he’ll see them!”, she would say crossly, meaning our benign neighbour, whose garden backed onto ours. The only way he could see into our kitchen would have been from an upstairs window, and then but a distant glimpse; yet mum was convinced that he would not only be able to see those brushes, but there was something shameful about being thus caught, or judgmental in his looking. Of course I knew this to be nonsense; but if I tried to reason with her about it, she would go wild.

“Do you have memory problems?”, ask the dementia campaigns.  While this is a simple opening gambit to encourage consideration of a syndrome whose symptoms are many and varied, it can be a misleading over-simplification. 'Memory problems' to most people means forgetting names and facts: where did I put my keys? Who’s whatsisname, you know, that bloke who plays the Belgian detective, him with the ‘leetle grey cells’?

The anecdotal examples I have cited above are bound up with memory, yes; but they are not as straightforward as momentarily forgetting something that can be recalled with a prompt.  They are cognitive malfunctions.

That’s why the proposed new name* for dementia is Major or Minor Neurocognitive Disorder (NCD) – an unwieldy and controversial term for various reasons, but arguably a more accurately descriptive one.

With hindsight, I can look back on all those strange incidents (over more than a decade) and see quite clearly that they were all part of the landscape of dementia.  But at the time, they seemed just isolated pockets of weirdness, and I grew used to them; it’s only when you step away and view from a distance that the overall pattern emerges.

Recognising dementia is a difficult business, whether for the medic making a diagnosis or for family trying to care for a loved one.  No two people experience exactly the same cocktail of symptoms (although there may be common themes); those I have described here were relatively low-key in comparison with others in my mum’s case, and surfaced over a very long period of time.

In subsequent posts, I’ll be looking at some of the more dramatic manifestations, which tend to be less discussed: personality change; emotionally disproportionate responses; decline in language skills; and paranoia, delusion, and confabulation – a confusion of fact and fiction, in which a person believes elements of fantasy to be actual memories.

There is a great deal still to be understood about dementia by both individuals and society.  A first step must be to acknowledge that it’s so much more than just a memory problem.


*American Psychiatric Association: Diagnostic and Statistical Manual of Mental Disorders (DSM-5), revisions to be published May 2013.

Some behaviour changes , as described by the UK Alzheimer's Society.